Hit enter to search or ESC to close
AltitudeExpeditionsOceansPeoplePolarSpaceWeb Sites

Since Blue Marble Exploration focuses exclusively on “extreme environments”, we are often asked “why?”.

There are many answers, but the bottom line is that putting humans in environments that are hostile to our very existence forces us to solve immensely complex problems. In order to accomplish our exploration objectives for each mission, we have to push the limits of technology, science, and human endurance. This in turn promotes innovation and creativity, which help us move humanity forward.

These types of expeditions also have a unique capacity to inspire millions of people around the world. They have a special combination of powerful visuals and dramatic storylines that capture imaginations across cultures, languages, and generations. This can be used to promote education, innovation, and conservation, as well as collaboration among countries, industries, and organizations.

Within the past 12 months, we have been fortunate to witness three very different expeditions to extreme environments. Below (in chronological order) is a brief summary of each one and some of its major contributions. 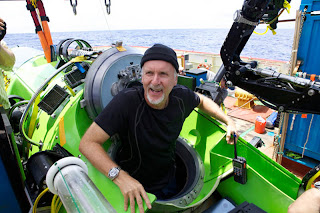 On March 26, 2012, James Cameron broke the world solo dive record by becoming only the third person ever to see the deepest point in the ocean. Challenger Deep in the Mariana Trench, plunges to nearly 11,000 meters (~37,000 feet), which is much deeper than Mt. Everest is tall. Prior to Cameron’s dive, the only humans to ever successfully complete this dive were Jacques Piccard and Don Walsh, who made the trip in the U.S. Navy-sponsored bathyscaphe Trieste on January 23, 1960.

In order to accomplish his mission objectives, Cameron had to develop a whole slate of new technologies, including his submersible, DeepSea Challenger. Besides his core team, the project relied on a diverse international group of small industry specialists, large corporate partners, and university departments. The expedition will be the subject of a documentary and a 3D film. 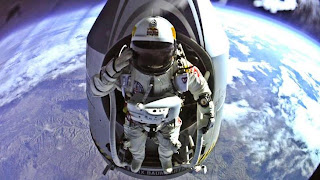 On October 14, 2012, Austrian skydiver Felix Baumgartner broke several world records, including the highest altitude jump (39 km / 24 mi) and the fastest freefall (1357 kmh / 844 mph). He also became the first human to break the sound barrier without a vehicle. Several of these records were previously held by Joe Kittinger, who made his jump on August 16, 1960, as part of experiments conducted by the U.S. Air Force. He worked as an advisor and Capsule Communicator for Red Bull Stratos, watching Baumgartner break all but one of his records (longest freefall of 4 minutes 36 seconds).

[Even though it was dubbed “Mission to the Edge of Space”, Baumgartner never even came close to approaching the internationally accepted boundary of 100 km (62 mi).]

To successfully complete the mission, Baumgartner’s international team had to develop multiple new technologies, including the suit, helmet, capsule, balloon, parachute, and life support systems. Because of the extreme pressures on his body, the medical team collected immensely valuable physiological data.

Perhaps the greatest impact was on mass media. The project was sponsored by Red Bull, which not only provided financing but also used its marketing muscle to make the skydive one of the most popular current events in recent history. The jump’s YouTube livestream drew a record 8 million concurrent views across 56 countries, and its Facebook posts reached over 50 million users. The resulting [inaccurately named] documentary, Space Dive, was produced by the BBC in partnership with National Geographic and Red Bull Media House.

This is an ongoing expedition to make the first crossing of Antarctica during the winter. Starting in March 2013, the 3,200 km (2,000 mi) traverse will take six months and will be done mostly in complete darkness and in temperatures as low as -90C (-130F). This project has been led for the five years of planning and preparation by Sir Ranulph Fiennes, one of the world’s greatest explorers. Unfortunately, he developed a severe case of frostbite during the preposition phase, and on February 25, 2013, he announced that he would be leaving the expedition team. The remaining 5 members are set to continue the expedition without him, expecting to complete their journey in September 2013.
For this expedition, the team is relying on technological advances in land transportation, fuel, clothing, and communications. In addition to accomplishing its mission objectives, the project hopes to raise US$10 million for its partner charity, Seeing is Believing.

Exploring Volcanoes to Save Lives